A Fruit Loop kind of Christian! 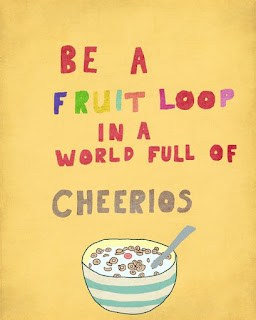 So I got to be honest here I wish I were a better blogger.  I sometimes go weeks without posting, and well I just wish that weren't true but as you know it is  Anyway on to what I want to write about.  I've never considered myself one of 'those sheltered kind of Christians, maybe you don't know what I mean,  if this post offends you that's not my intent.  What I mean is, I don't carry a bible everywhere,  I watch a lot of movies that aren't labeled Christian, and I try to stay up on the latest entertainment trends.   I not so secretly roll my eyes, when people imply that public school  is the devil's domain, mostly because my mom works in public school, and I went to public school and it wasn't all bad, much was good.  Recently though, God has challenged and convicted me about some of my entertainment choices,  There is one show I love, and last week it showed a scene with 2 homosexual men in it, which isn't  typical of the show, but there have been hints dropped in almost  episode that were pointing to a homosexual agenda.  I tried to ignore it, because I wanted to continue watching the non-homosexual plots in the show, and I wish I could say as soon as I saw the scene in the show I turned the channel right then, but I didn't.  The next day the image burned in my mind, and so I prayed asking God to help me turn away from the show and cleanse my mind, because I honestly don't want to stop watching the show even still.  I found myself saying:  "God, I don't want to be one of those fruit loop Christians!  But every scripture I came to talked about being set apart as holy unto God.   The next day I told someone I had felt convicted, and they kindly responded, It's not real it's only TV.   On some level there is truth to what they said, but the conclusion I came to is that  God genuinely convicted my heart,   and that while I don't want ever to be fully isolated from culture, and legalistic and judgmental of other people, my process toward sanctification may look and be different John Doe, but I'm called to choose obedience even if I look at times like a fruit loop, as I draw closer to Christ  I may never be convicted by something, but maybe another person would, and I should respect them for it!  Romans 12:2 Do not conform to the pattern of this world, but be transformed by the renewing of your mind. Then you will be able to test and approve what God’s will is—his good, pleasing and perfect will."  I admit I am uneasy about this going deeper with Christ process, because I what else will be pruned away ?  The truth is a show isn't much of a sacrifice, and never will Christ ask me to sacrifice, more than he already has for me!  Balance is key.  How do you balance being in the world, but not of it?  Any thoughts?Image here
Posted by Dontmissyoursunsetlady at 10:12 PM 3 comments: