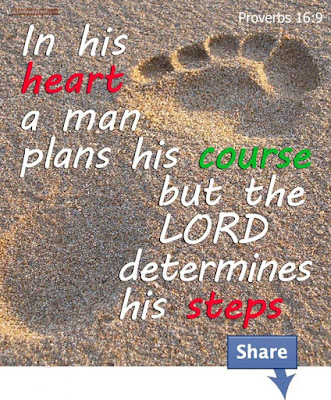 
In their hearts humans plan their course,
but the LORD establishes their steps. Prov. 16:9
Well this weekend I was reminded of the above.  For those of you who don't have type A personalities I covet your life!  One of my biggest fears in life is being unprepared.  I feel safest when I'm surrounded by structure.  I was asked a few months ago to speak at a a local conference hosted and organized by my friend, who God created:a fun loving, free spirit awesome woman of God.  Even though I had done some planning for the event, every time I tried to put the pieces together, I couldn't, and yet I still knew God had directed my friend and me that God wanted me there.  In my family, all the women gifted and detailed planners.  Everything about that night was amazing, but there was still this one thing, even after getting in place to speak, I still had no idea how all the pieces fit, despite hours weeks of study and prayers.  If I had not feared shattering my best friend's heart, or found comfort in the wonderful prayer circle around me prior, I would have found the nearest exit.  All I kept thinking is Lord what is this, I have spoken to large crowds before, and I've never been this shaken ..  I have spoken at graduation, communication is what I do. I knew God had his way that night, and that in spite of my weakness. He spoke his words and conveyed his love and truth, and it wasn't as if I choked, he was faithful!  For the most part I kept my composure until we pulled out the parking lot, and then the sobs began.  I realized  later what I was afraid of was not speaking, what I feared most was not having control, and appearing unprepared and irresponsible.  After I prayed about this I realized God didn't want me to appear in control, because the fact is, I'm not in control, because no matter what I do or don't do, I'm not IN Control, and I never have been.  God wanted me to see He didn't me to do or be anything to be of use to him.  He has the power to use, whoever, not matter the condition they find themselves.  My need to "seem" in control hiders God's leading in my life at times.  Iff Friday night had gone differently, then I never would have seen God show up that way He did!  I use to think that people who said, they followed the Spirit was code for "I didn't prepare so I'll just wing it"  I realize now this was a very sinful and arrogant assumption on my part.  Once I got beyond this, I was able to do exactly as He  planned, frailty and all! and I was just blessed enough to be along for the ride!  My preparation and illusion of control, is an idol that colors so much of my life     Don't miss what God wants to do, being so busy staying in your box!  Take it from a control freak, who had a meeting with Jesus!  I love you Jenn! thanks for listening to God, and being just who God created you to be!  Even if I had the power, I would not change one thing!  My dear readers make your plans, but don't let your plans, become your" god"
Posted by Dontmissyoursunsetlady at 10:04 PM 3 comments: